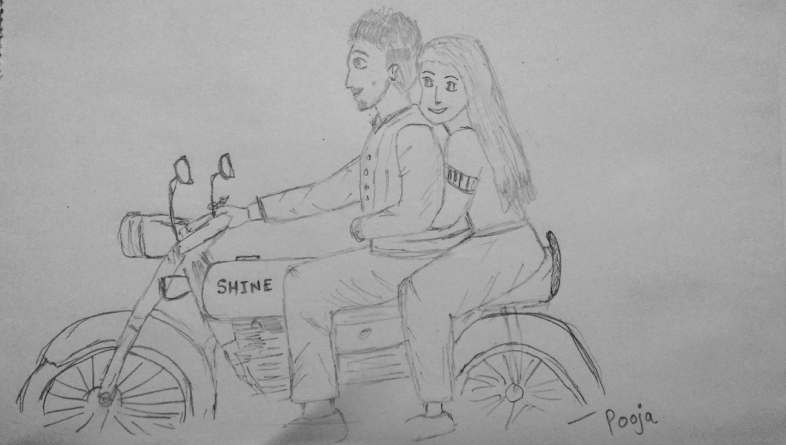 It was evening and we were on our seperate bikes. We had some numb conversation about your friend you used to like.
I saw your eyes filled and I felt a twinge in my heart. It had been a week or so, when I had told you my feelings for you were hard.
It was twist in my life. I thought I lost it. My love for you had grown all wide, but in that evening I came to know, maybe it was him you liked.
I thought of leaving the road of your life. And I remember I tried to convince you, that for you, he was right.
I was talking with a smile, but deep down my heart lied. It wanted you to think only about me, because I was the one who dreamt of a whole new life.
I was sure till than, I would never find anyone like you. My eyes when shut, could see you. My ears in silence would hear you. My hands in emptiness would feel you.
Your words were clear in my head. Thinking about you, I never had to make up a sentence you said.
Talking about you, I would get carried away. Just like now I started with the evening but got lost in your way.
I tried convincing you that for you he was right. but replying to my every sentence, you just denied.
You told me, you couldn’t think about him. And I was forcing you to try, not even caring to ask you.... BUT WHY?
It was a night of pain. My viens were dry. I could feel no blood in my body and no tears in my eyes to cry.
The day after that was soft and sober. We were working on our desk and talking all normal.
We decided to take a walk after work and you wanted to get those choco chips, I knew you liked.
It was evening and we were walking with our hands held tight. You walked close to me even if your love for me was never defined.
You were calm and in peace with me. I could feel your smile even if you turned your head to the other side.
I brought up the same topic about him from the last night. I wanted you to be happy and choose your Mr Right.
I asked you what did you feel about him. I suggested you, to give him one more chance. But you were silent and just listening to my words with a smile.
You pressed my hands and asked me to stop. You looked down and told me, He is late.
I got confused and wanted to know what did you mean. Why were you acting so different?
You repeated your words and kept your head down. You spoke slowly holding my hand as if you never wanted me to leave.
You told me... Because I love you. And it made my heart shiver. My lips curved out for a smile just like this moment.